onceinaweb
Web Analytics and Web Development - based in the Richmond, Virginia region

Webtrends is in the game 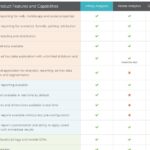 Web Analytics shootouts are always useful to those who haven’t yet committed to a web analytics platform or who are looking for an alternative. Most web analytics users are using Google Analytics “free” and Something Else paid. Now that Google Analytics 360 has come along and isn’t as expensive as the old GA Premium many WA users want to take a look at all the tools and platforms available.

Webtrends has done a major rewrite of their pioneering offering and they are in the game with Webtrends Infinity. The features and capabilities checklist is rather impressive, with all the real-time capability. Infinity looks to address many of the issues and shortcomings of Webtrends older offerings as well as those of other vendors. I look forward to testing Infinity in the near future, especially since new web analytics deployments are facilitated with tag management tools.

It’s not news now, but for those who’re always striving to achieve continuous improvement in web analytics could do worse than reading up on the W3C’s document of a specification for a web analytics Data Layer.

I found out about the concept of a so-called data layer for web analytics early in 2013. I’m sure I was late to that party, but certainly there’s many others who’ve never even made it to the party (but there’s still time). Data Layer is one of the best things to happen for web analytics implementations in my opinion. I first read about them in an article from Justin Cutroni in relation to usage of data elements by Google Tag Manager, but, GTM has no corner on the data layer market though… any web analytics tool can work with a data layer, thanks to Javascript and particularly, jQuery (my new best friend since ’13).

Read more about data layer and other techniques for web analytics at Jan Exner’s great blog, “Web Analytics for Developers”

Pedro Monjo also has a good post about data layer usage at his blog.

Hit and Run and a belated Happy New Year

So, today is the first day of daylight saving time (DST) here in the U.S. and it’s also the occasion of my first post of 2015. So, belated Happy New Year to you all, and here’s a heads up that this post will be a hit and run listing of links I want to keep track of. You may find some of them useful too.

First off is Omniture for Beginners by Tom Capper at Distilled. At the very end of the post is a table which will help guide folks accustomed to Google Analytics as they get started with Adobe Analytics. That table is the reason I kept this post around. I’m sure it will come in handy as I train and teach others in the future.

Next is a post by Stuart Roskelley at his blog, “How to Dissect a Vendor Script”. His blog is aptly called “The Hidden Layer” and it deals with modern approaches to web analytics using tag managers, DOM scraping, etc. I found the post relevant because I’ve spent a lot of time recently shoehorning vendor tags into tag management and making all the tags play together nicely. I do have to admit that some of the problems I’ve encountered were self-inflicted, but that’s how I learn. Breaking and fixing.

Until next time, ‘keep on trackin‘! *
*(With apologies to Dan Fredeen)

With apologies for not posting any blogs since May, I’ll just dive right in. At long last, I received an email from Adobe announcing that its legacy tag management tool, Adobe Tag Manager 2.0 (ATM) would be phased out beginning in August 2015. Originally most of us had read that December 2014 would be the sunset date, but since only recently have we been informed about old versions of Report Builder being phased out in January 2015, I figured ATM still had some time left. And so it does, thankfully.

ATM 2.0 served me well allowing me to build a fantastic SiteCatalyst implementation on a hosted system where I couldn’t make programming changes for web analytics just any time I felt like. It also allowed us to establish control over 3rd party vendor tags, and in general, ATM got me to learn jQuery (and about time!).

So, thanks Adobe, for making ATM available a while longer… and thanks especially for bringing Satellite into your product mix as Dynamic Tag Management (DTM) which will be the successor to ATM.

On to the really important dates:
We’ll be able to edit ATM tags and containers until August 1, 2015, and by October 1, 2015, ATM will no longer function. This allows plenty of time to move onto DTM as soon as possible. This way we can complete peak season comfortably this year, then move on to the next generation of tag management.

Looking forward to your comments and ideas…

The people at SimplyMeasured have compiled a great list of free tools you can use to analyze your brand’s reach on popular social channels. Take a look, try ’em out, and bolster the data you’re already getting from SocialMention, Google Analytics, etc.

Recently I completed an initial implementation of Google Tag Manager on VPASP version 7.0 shopping cart, and I’m about to begin another implementation.  It wasn’t terribly difficult, but it was a little tricky to get the ecommerce integration set up properly and I implemented a DataLayer within VPASP’s order confirmation page logic to make it all work.  Please send me a comment or contact form if you’d like more info about GTM and VPASP.  (honestly I was surprised  not to find any other writeups on the topic)

Working with Clickstream Data out of Adobe Analytics

4/28/14 UPDATE: the original thread on LinkedIn for this topic continues to draw useful comments regarding serious implementations/requirements. Take another read on it as time permits.

I honed in on an interesting thread on the Omniture Enthusiasts group on LinkedIn. The topic author, Nicholas, asks: “Has anyone has implemented a SiteCatalyst Clickstream Database solution?” The thread has turned into an interesting conversation, and another active participant has posted an R package at GitHub to faciliate this type of data movement and analysis. Turns out that it is possible to have a daily dump of clickstream data sent similar to a Data Warehouse data file for further processing. Hmmm – what an intriguing possibility.

Saving Page Referrer as an eVar for better correlations

Antti Koski has written a well-illustrated post about using SiteCatalyst processing rules to save page referrer data in an eVar for better correlation in analysis. I expect to try this using logic in my Adobe Tag Manager code in the meanwhile. I agree with Antti that using the default Referrer report in Adobe Analytics leaves much to be desired. When will it be possible to correlate everything with everything?

This week’s Adobe Digital Marketing Blog post for Analytics offers insight into Adobe’s plans for Dynamic Tag Management (the recently acquired Satellite tool). I found it most interesting that in 2014 it will support a formal integration of Google’s Universal Analytics, as well the possibility of DTM being made available publicly, not just to Adobe customers. I only wish there were more documentation, samples and other education about this fantastic tool available now.

At last, the good articles about creating and maintaining a web analytics Data Layer for tag management are coming to light. Josh West at Web Analytics Demystified has written an article entitled “Getting the Data Layer Right” and while it does not mention any specific tag management system (TMS), it builds the case for making careful choices when setting up a data layer and reasons for using a data layer rather than relying on query strings or accessing DOM elements directly.

I became aware of Josh’s post when an email arrived from Jan Exner’s Web Analytics for Developers blog, and it contained his commentary ‘”Data Layer” Tips’ which provides additional guidance more closely related to using Adobe SiteCatalyst/Adobe Analytics. This is primarily because he mentions using Processing Rules and Context Variables and s_code.

Enjoy these articles and enjoy the benefits of implementing a data layer for your current or next web analytics project!

Learn more about what we do