onceinaweb
Web Analytics and Web Development - based in the Richmond, Virginia region

The people at SimplyMeasured have compiled a great list of free tools you can use to analyze your brand’s reach on popular social channels. Take a look, try ’em out, and bolster the data you’re already getting from SocialMention, Google Analytics, etc.

About a year and a half ago I built a website for my longtime personal dentist, Dr. David Circeo, and I set up a blog section for him to begin to fill over time. Today I looked in at his blog section and found many great posts about a new associate, community outreach and dental care history. Turns out Dr. Circeo is a star blogger in my mind, because he didn’t try to make up stilted posts, he simply writes about the normal comings and goings of running a dental practice. Thanks for making the most of your blog, Dr. Circeo!

Pinterest just brought it’s web analytics offering to the public this past week. It is aimed at business users of the platform. The idea is to help business owners understand what content is being pinned from the business site. There are a few hoops to jump through to get this analytics tool, but the price is right! The biggest items are switching to the newest ‘look’ in Pinterest’s interface and verifying ownership of the website for which you want to view data.

While I personally can either take or leave Facebook, I am interested in search, and a lot of folks are at least trying to monetize Facebook. So FB’s latest tweak makes for a little blog post for the new year! Anyway, this new update in Facebook, while currently in limited beta, is aimed at making its search functionality more powerful and easy to use. According to the article at the link above, the first four parameters are to be: People, Photos, Places and Interests. Apparently there is a waitlist to get this feature, so FB can monitor usage during the rollout. Wouldn’t you like to be privvy to those analytics! (Thanks go to my colleague Brian Reilly at RevD for his timely LinkedIn post about Graph Search!)

I just read about one photographer (who is also a lawyer) who decided to take down her Pinterest page because of possible copyright worries. Take a look and decide for yourself if you want to continue pinning. Seems a bit risky to me as well.

This huge infographic poses the question, Is Social Media Marketing Effective? Then goes about proving or disproving it. Most web analytics tools have added the ability to track the effects of Social Media efforts, but implementation is not simple and reading the results less than straightforward. Looking at any reports, keep in mind the real reason you’re making efforts in the Social Media arena: most likely it is to increase conversions. Keep the real reasons in perspective when quantifying all thoses Likes and Followers!

It’s a new term I heard yesterday. “Hate” Surfing is when a business owner surfs the web looking around to see what others have posted about her business, such as negative comments, etc. This is part of the bigger picture called Reputation Management, and it also helps businesses to constantly improve their operation and offerings.

Everyone wants to tag along with Facebook’s popularity and grab some traffic there. If you’re running Omniture SiteCatalyst web analytics, this blog post discusses some integration options without giving away the store. There’s a lot of good info here – I hope to have some time soon to test the techniques demonstrated. 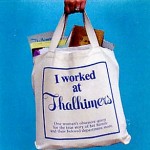 I am a Thalhimers alumni. I got my start in the computer industry at the regional retail giant back in 1988 when Mr. Lee Roberts, VP-IT (CTO) asked me to work as a computer operator with no prior training (previously I had been a stock boy and ‘relay’ assistant manager since joining in 1986). What a lucky break for me! From the computer operations department I got a rare look across so many of the company’s internal functions and I met so many people who would teach me so much about business, computing, and professional networking. At the time I had no idea that my recently discovered affinity for computers would lead to a long-term career.

Finding Thalhimers is a new book written by a modern descendant of the Thalhimer family. Thalhimers was a regional chain of 26 large scale department stores located throughout four Southern states, and headquartered in Richmond, Va. The store was founded in 1842 and and grew steadily until about 1990 but ultimately lost its identity when management and operations were dissolved while several locations were folded into another department store chain by a new owner in 1992. As a result, Downtown Richmond, Va., location of the original flagship store which endured until 1992, has never been the same without the large scale retail that had existed at Thalhimers and its long-time rival Miller & Rhoads, which went bankrupt in 1990. Many folks in the region still fondly remember the legendary customer service, enjoyable shopping experiences, and sweets from the bakery, all found at Thalhimers.

The Finding Thalhimers book describes the family behind the store from an insider’s point of view. It is a compelling read for anyone who remembers the magic the stores offered year ’round, particularly during the holidays. I enjoyed reading the book which provide many previously little-known family stories and abundant background information about the store’s development since 1842 and incredible growth during the first 90 or so years of the 20th century.

Social Networking (SN) is rapidly becoming an accepted practice in the business world. Branding and brand protection are some of the main reasons businesses are using SN sites. A great way to find a name or ‘handle’ for your business which can be the same across all or many SN sites is to use namechk in much the same way as finding a valid domain name to register.

Learn more about what we do